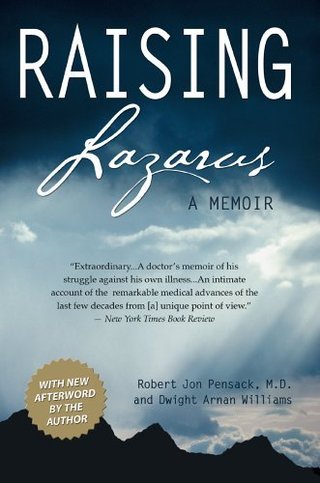 Download a sample chapter of Raising Lazarus, A Memoir by Robert Pensack in PDF format. (4.43 MB)

“In my case the memory of my mother’s blood has manifested itself in my heart, gradually reducing me to an invalid, and finally a cannibal of sorts. The progress of days has led to exile. In order to live I must do so beyond the realm of nature and common human experience, so I have developed a kind of blood-sense. Through it all I have experienced the isolation of those who have seen too much, whose victories were all Pyrrhic victories. What I have come to know with terrifying intimacy isn’t something that can be shared around dinner tables. The traumatized Vietnam Veteran, the Holocaust survivor with flat, distant eyes… these are my people, those with whom I feel kinship. Mortality, like love, is something that can come to be known only by way of experience. Through a lifetime I have been in the process of dying, consistently surprised when reminded that life is appallingly brief, and briefer still for me. The prospect of an early death has amounted to little more than embarrassment and loneliness, even though the routine of living can be, and usually is, just one goddamn thing after another. A new heart was somehow supposed to be my bloody-red carpet of victory.”

"It is the company of others that goes further toward erasing everyday terrors. This is my unconscious belief. The terror to which the ordinary madman is attuned, the resolution of physical reality magnified beyond comprehension--there lies the pith of loneliness. When the world within the silent vault of consciousness can no longer be reconciled with outside phenomena, the bedrock of lonliness is revealed. Other human beings are the receptors of communication, windows between worlds. Without them isolation is absolute, an disolation is the germ of all madness."